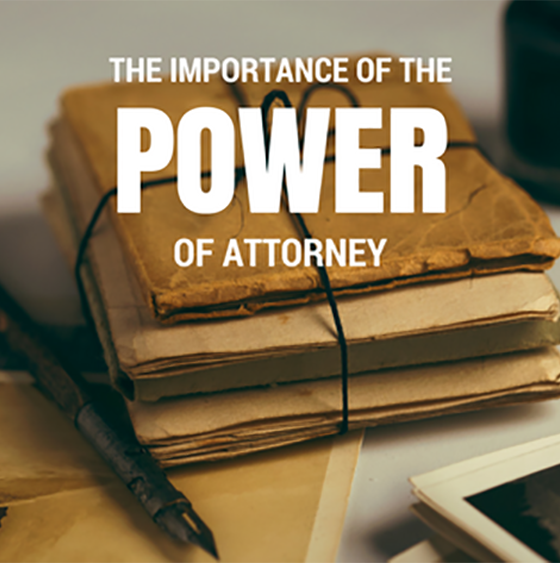 The Importance of the Power of Attorney

By law, the Power of Attorney is a piece of paper that will declare the name of the person that is legally allowed to act on your behalf when they are representing you. This person is required to be completely honest and trust-worthy. Often, this person is referred to as the attorney-in-fact. Whenever giving someone the power of attorney, you are giving them a lot of control over your matters so there needs to be a great deal of trust between both individuals.

Whenever an individual or a group are unable to make a decision for whatever reason, the attorney-in-fact can step in and make the necessary call. Most commonly, this is used in a corporate setting when the board members are required to attend every meeting but are unable to do so. In this instance, many times the power of attorney is used to have a company lawyers sit in at the meeting and make appropriate signatures in place of the board member.

Many times, for whatever reason, a person is not able to sign a legal document that validates a monetary transaction such as signing over a deed or a title. In this case, an attorney-in-fact is allowed to step in and complete the exchange. This power gives them the ability to invest in markets, manage your assets, and sell property.

The medical power of attorney is one of the most important powers that an individual can have. This allows a trusted individual to make good faith decisions relating to your heath, whenever you are unable to do so. The medical power of attorney does give the person control over life support but prevents them from doing other things such allowing doctors to perform an abortion.

For couples that are living far apart, the power of attorney can be a powerful and necessary tool to have. It allows the attorney-in-fact to spend money in an emergency, claim a bank account for an individual, or sign many important documents that the other individual is not able to be there for.

Giving somebody the power of attorney requires you to have a great deal of trust for that individual. Whether it is for company or personal reasons, sometimes having an attorney-in-fact is necessary. In many instances, hiring an attorney-in-fact will save you money. They help to solve problems, sign documents, and represent you whenever you are unable to do so yourself.

Alternative Cryptocurrencies You Can Invest in Long Term

Alternative Cryptocurrencies You Can Invest in Long Term

With all the fervor surrounding bitcoin and other blockchain-based currencies, it’s easy to get caught up in the momentum and start planning your early retirement. After all, even a late adopter of bitcoin could have made a massive profit at this point. As of this writing, the crypto token is trading for $16,363, up from $1,000 at the beginning of 2017. That’s a big increase, but it’s peanuts compared to the profits that an early investor would be seeing; the current value is more than 30,000 times the value of the token at the beginning 2011, meaning even a small investment would be worth millions. But these wild fluctuations in value are characteristic of a volatile currency.

A volatile currency is one whose exchange rate changes rapidly and unpredictably. Just a few months ago in September, a single bitcoin’s value hit $5,000, then dropped by almost half that in a matter of days as investors rushed to cash in on the bubble.  This volatility has attracted criticism from the financial sector, as seasoned investment experts recognize similarities with the dotcom bubble of the early 2000s, when technology stocks skyrocketed in value and then crashed just as quickly, losing investors millions. So, what cryptocurrencies are safe to put your money in? While investment experts warn that no crypto token is a particularly safe investment, here are some to consider.

Litecoin is notable for a few reasons: it’s one of the oldest alternatives to Bitcoin, and it’s capable of handling a larger volume of transactions than the more famous cryptocurrency. It lacks the name recognition of bitcoin, but that may be a good thing: with fewer eyes on the price, there’s less chance of a bubble burst and more probability of a relatively stable rise and fall in exchange rates. Another bonus of Litecoin: it requires a password for transactions, an extra layer of security in its wallet.

Created in 2013, Primecoin is named for the way it’s mined. Miners have to find sequences of prime numbers called Cunningham chains in order to get tokens. With a market cap of $7.1 million, Primecoin isn’t likely to get too widespread, but that means it’s also not likely to crash.

Ripple has no mining system, setting it apart from most other cryptocurrencies. It also works as a payment network for other currencies and an automated currency trading system. Ripple advertises itself as “one frictionless experience to send money globally,” and it’s this function that’s attracted investments from Google and TechCrunch founder Michael Arrington. If you trust their judgment, Ripple might be the token to buy.

Dash is a privacy-focused open source software with very low fees; in some circumstances, you can transfer funds for no fee at all, and instantly at that. Dashcoin, Dash’s associated token, often remains steady even as bitcoin and other cryptocurrencies dip into the red, as is the case of this writing.

With nine rounds of hash encryption, Quark is a cryptocurrency software devoted to anonymity and security. It also claims to be the fairest cryptocurrency, since it can be mined by anyone with a CPU rather than people with massive server farms.

Stability is the name of the game with this cryptocurrency, whose creators have an eye on the Chinese market. While it’s still in its infancy, it shows signs of catching on and increasing in value soon, and as it stands, you can buy in for very cheap.

Initially spawned by a widely-circulated meme of a Shiba Inu, this cryptocurrency has grown to become a market force that’s anything but a joke. The word-of-mouth surrounding Dogecoin has propelled it to a $59.3 million market cap.

If you have found a spelling error, please, notify us by selecting that text and pressing Ctrl+Enter.

The following text will be sent to our editors: